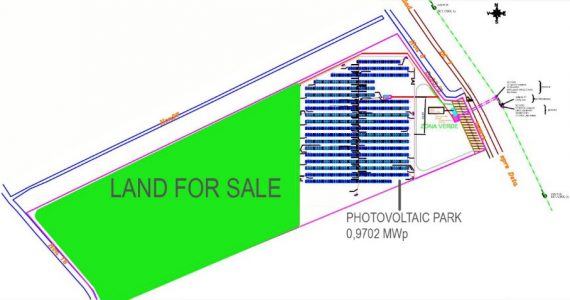 The promotion of electricity production from renewable energy sources based on 3 green certificates ends for this park in 2029.

LAND FOR THE CONSTRUCTION OF 2 MWp PHOTOVOLTAICS

Land of about 50,000 square meters, already outside the agricultural circuit and prepared since 2013 for the construction of a photovoltaic park. The initial land was 77,940 sq m, of which 20,415 sq m used for a photovoltaic park of 0,9702 MWp (built and in operation).

The current legislation does not allow the construction of photovoltaic parks on agricultural land. The land has already been removed from the agricultural circuit and became “curti construcții” in 2013. No PUZ (Zonal Urban Plan) is required, only building permit.

It is possible to use the connection to the medium voltage power line built for the existing park.

The promotion of electricity production from renewable energy sources based on green certificates ended on December 31, 2016.

Any cookies that may not be particularly necessary for the website to function and is used specifically to collect user personal data via analytics, ads, other embedded contents are termed as non-necessary cookies. It is mandatory to procure user consent prior to running these cookies on your website.